Violin making in Markneukirchen: the tradition of craftsmanship and globalisation

On 6 March 1677, Duke Moritz von Sachsen confirmed the founding of Markneukirchen's first guild of violin makers, which was established when 12 Bohemian immigrants who had made their homes in the Vogtland region joined forces (cf. Klingenthal – the origins of violin making). To safeguard the quality and integrity of this new community, the guild issued strict rules: applicants had to present sophisticated masterpieces, pay high fees for admission into the guild and find someone who would endorse their application. 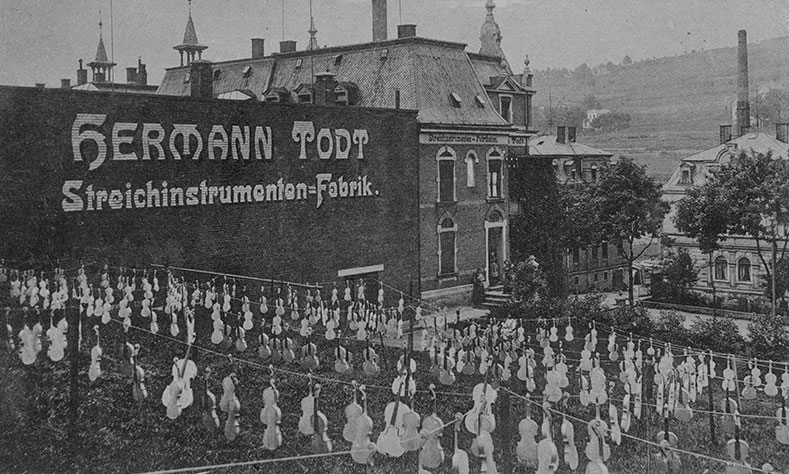 This makes the year 1713 a much more meaningful date, since it was the first time someone "untrained" was accepted: merchant Johann Elias Pfretzschner. Until that time, the masters themselves personally attended markets, fairs and clients, even when great distances were involved. The dawning “professionalisation” of selling violins turned out to be a blessing and curse at the same time. On the one hand, it led to the global success of Vogtland stringed instruments; on the other hand, it brought about the decline of handmade violin making, which gave way more and more to a division of labour, if not to industrialisation.

In 1719, the Markneukirchen guild had already accepted a craftsman who specialised in peg turning, and shortly thereafter there were separate studios run by neck carvers and makers of violin tops and bottoms. Ultimately countless numbers of people working at home did preparatory work for the few remaining studios of master craftsmen. Labourers often called themselves "factories" and assembled the individual components on behalf of the brokerages that had grown in impressive numbers. These businesses expanded to meet the demands of the globalised market which wanted larger and larger amounts of inexpensive instruments. Around 1800, there were some 80 Markneukirchen businesses working together to produce around 18,000 violins annually. They focussed more and more on the highly sought-after Italian models, turning away from its own Bohemian-Saxonian tradition. A century later, Markneukirchen was considered one of the most affluent cites in Germany; it even had its own U.S. consulate general. The dark side of this profit, however, was the great need of the many smaller and financially dependent masters, their families and apprentices.

Crossing borders: on the history of violin making in western Bohemia

Klingenthal: the origin of violin making

The violin: provenance, value and appraisal.