Rembert Wurlitzer and the travels of antique violins

Rembert Wurlitzer: a brief introduction to life and work of the famous US violin expert

When one traces the paths of fine stringed instruments over time, one keeps coming across the same familiar names, almost as though there were safe harbours towards which an antique violin by Stradivari, Guarneri or Vuillaume would invariably steer—and not just once, but many times during the course of its long musical career, which could last far longer than a human life span. For about eighty years, the violin department of the Wurlitzer Company in the USA was just such a refuge, where the world’s most valuable stringed instruments arrived and were repaired, appraised and sold. Considering how infinitesimally short that period was in the great scheme of history, the name Wurlitzer appears with astonishing frequency in the “biographies” of antique violins. It also appears in the biographies of many great experts and violin makers of the 20th century who spent decisive years with Rembert Wurlitzer, each in their own way becoming one of his heirs.

The history of the Wurlitzer family extends far back in the European, or more precisely, Saxonian instrument-making tradition. Towns in the Vogtland region such as Wernitzgrün, Erlbach and Schöneck were the seat of many branches of the family that specialized in making different kinds of musical instruments. The Wurlitzer family connections are convoluted, but their roots can definitely be traced back to the 16th century. In 1853 Rudolph Wurlitzer, an instrument maker who was born in Schöneck in 1831, left his home and settled in Cincinnati, Ohio, thus laying the cornerstone of one of the most multifaceted and successful music businesses ever seen in the USA. Rudolph Wurlitzer’s ascent was greatly facilitated by the outbreak of the American Civil War, when his company became one of the leading suppliers of brass instruments and drums and rapidly began to expand. The company reached its long-lasting heyday at the turn of the 20th century under the direction of Howard Eugene Wurlitzer, Rudolph Wurlitzer’s eldest son; his keen entrepreneurial instincts led him to invest in automatic musical instruments, which were hugely popular at the time. The company soon began to make entertainment history by manufacturing theatre organs, versatile instruments that were the perfect accompaniment to silent movies.

The company’s impressive economic success made it possible for Rudolph’s second son, Rudolph Henry Wurlitzer, to be sent to Berlin in 1891 to study the violin, music history, acoustics and violin making under Emanuel Wirth, Oskar Fleischer, Hermann von Helmholtz and August Riechers, all leading experts of the era. Armed with this expertise, upon his return to the USA he proved that the Wurlitzers could hold their own in the highest echelons of the musical instrument business. By the end of the First World War, more than 200 valuable antique stringed instruments had found their way to Rudolph Henry Wurlitzer, among them some of the greatest masterpieces in the history of violin making. 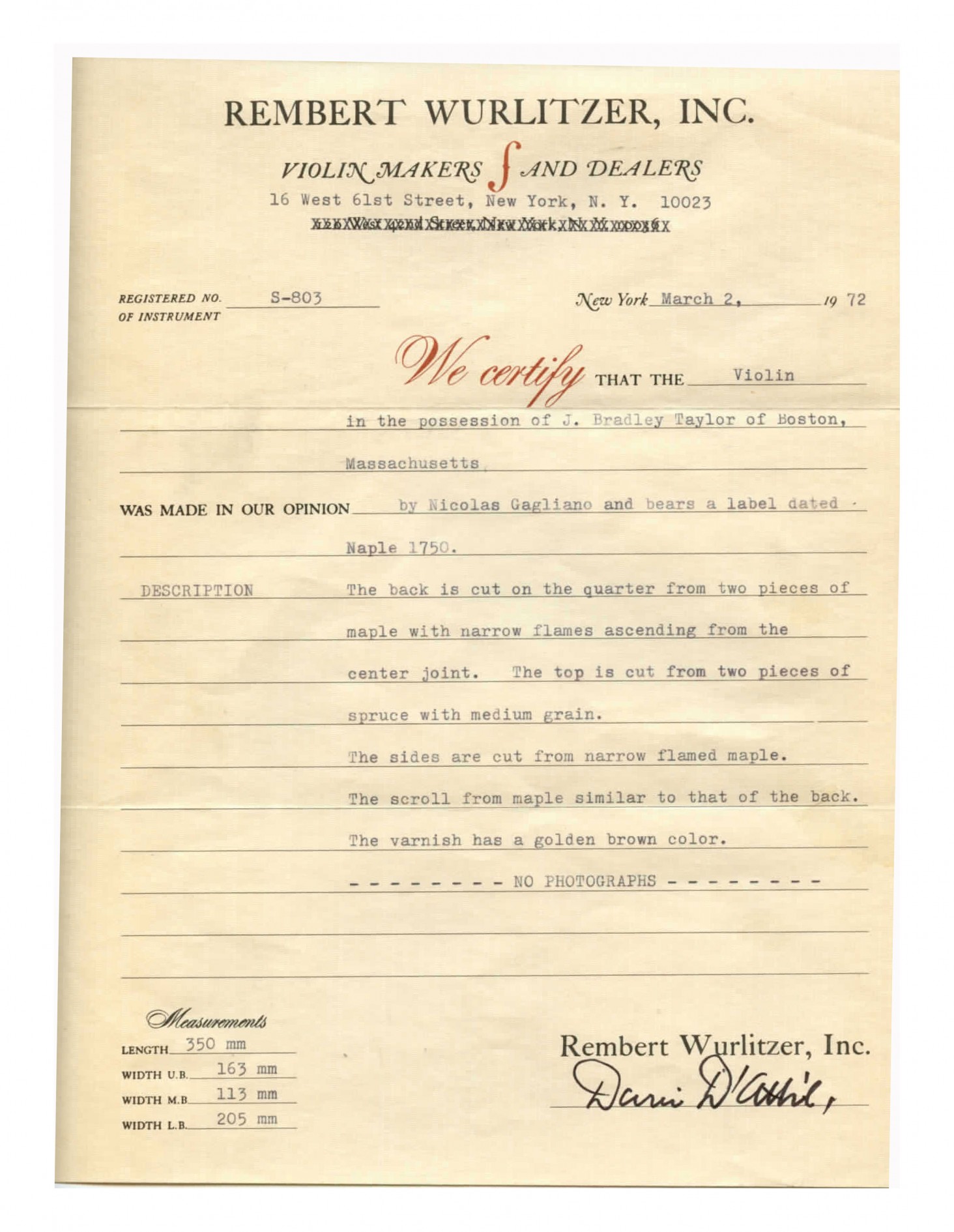 In 1930 Rudolph Henry Wurlitzer’s son Rembert Wurlitzer joined the company after having learnt his trade at the most prestigious places in Europe. His travels led him to Mirecourt, where he studied at Amédée Dieudonné’s atelier, the same workshop where Bernard Millant and Etienne Vatelot would receive their training 22 years later—before perfecting their knowledge in New York under Rembert Wurlitzer, who by then had long since become a leading, world-renowned authority.

After spending a further year in London as Alfred Hill’s guest at W. E. Hill & Sons, Rembert Wurlitzer returned to America and assumed the direction of the violin department at the Wurlitzer Company. In 1937 he moved the department to New York and in 1949 detached it from the family enterprise altogether, running it as his own business until his death in 1963. Within those comparatively few years, Rembert Wurlitzer acquired an international reputation as an violin expert whose appraisals, certificates and photos rank among the most significant records pertaining to antique stringed instruments to this day. Beyond his expertise, Rembert Wurlitzer earned a lasting place in the annals of music history as a friend and patron of great musicians, including such illustrious names as Kreisler, Oistrach and Stern, and as a trusted consultant to owners of precious instruments. More than half of the documented Stradivari instruments are said to have passed through his shop and atelier. After 1963, his widow Anna Lee Wurlitzer continued to run the business together with Fernando Sacconi. Their acquisition of the Hottinger Collection in 1965 marked a final sensational episode in the history of the dealership before it closed its doors in 1974.