J. & A. Beares and Beares: expertise during changing times

About the history of Beares, the J. & A. Beare company, London, and about life and work of Charles Beare

The history of the Beare family of London is an object lesson in the art of playing second fiddle: during their first one hundred years in the trade, the Beares were eclipsed by the legendary house of W. E. Hill & Sons — only to emerge victorious in the 21st century by virtue of their business acumen and globally recognized expertise. Today the names Beare & Son and Beares stand for the best traditions of the British stringed instrument business, epitomizing values that reach far back into the 19th century. 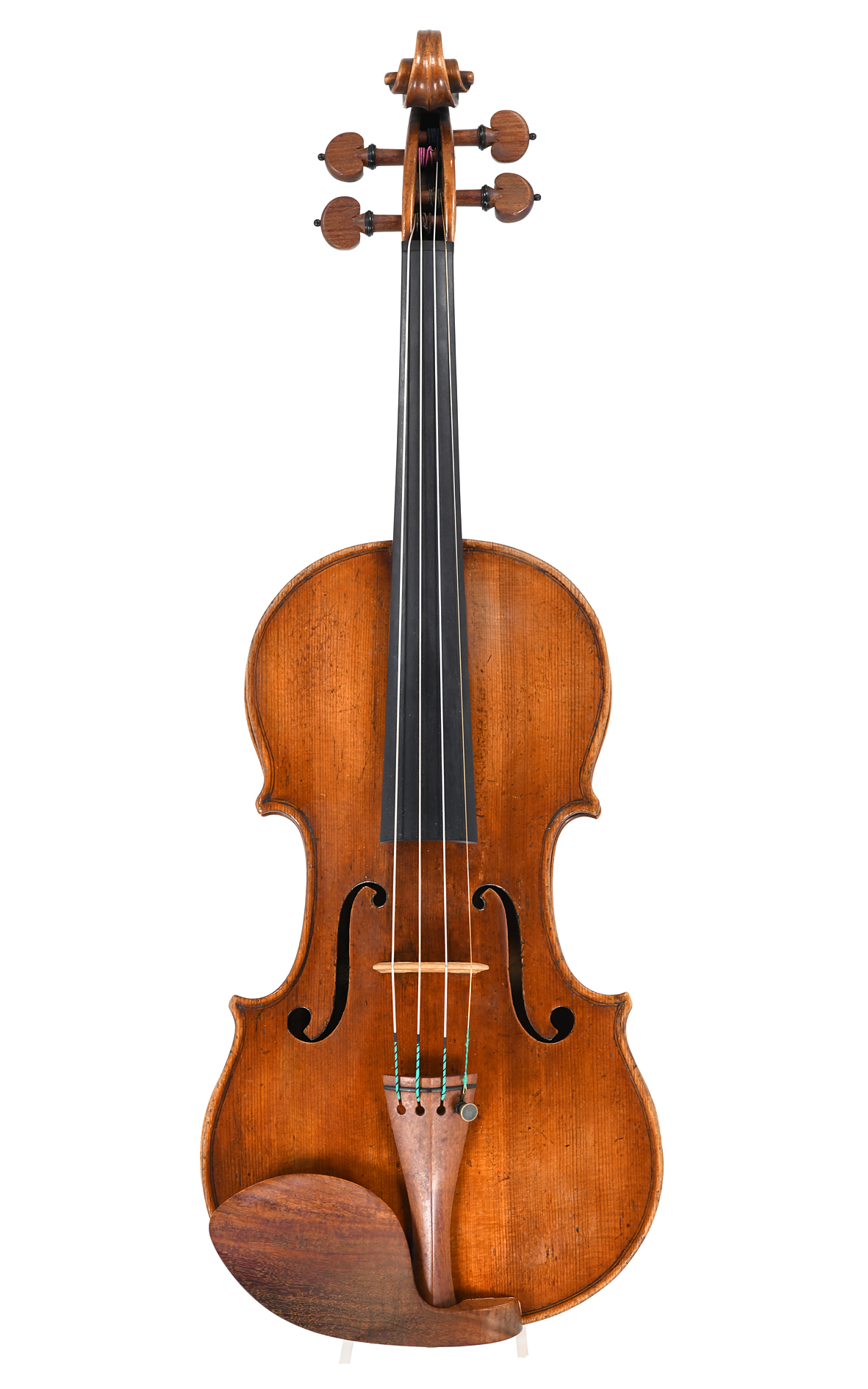 Early years: from Beare & Son to Beare, Goodwin & Co. all the way to John & Arthur Beare

When John Beare, not quite 20 years old, established himself as a dealer of instruments in 1865, William Ebsworth Hill, who was 30 years his senior, had already been a luthier for half of his working life. Young John Beare made a name for himself as a canny businessman in a variety of areas. He is said to have been the first wholesaler of musical instruments, and in the 1880s he even ventured into publishing to issue some of the first compositions by his friend Edward Elgar — a significant episode in the history of music. In 1892, five years after W.E. Hill & Sons was founded, John Beare recognized the growing interest in antique instruments and split his business into two branches, both of which are still in existence. Beare & Son moved to Rathbone Place, London and mainly concentrated on making and selling new instruments; Beare, Goodwin & Co. opened its doors in Wardour Street, specializing in antique instruments of the violin family. The latter firm’s name changed to John & Arthur Beare after the turn of the century.

Each company influenced the music world in its own way. Beare & Son, which at first was headed by John Beare’s eldest son Walter Beare, remains a thriving dealership to this day, selling stringed instruments as well as a wide range of materials and parts for luthiers and restorers. By introducing new labels such as “François Barzoni” and “Giuseppe Maravelli”, Beare & Son was so successful at bringing French and German factory-made violins to the market that even prestigious auction houses and distinguished authorities sometimes mistook the well-sounding names for Italian master violin makers—an error that serves as a good indication of the quality of the best instruments offered by Beare & Son.

John & Arthur Beare, the second company, quickly became established, profiting from the good reputation that Arthur Beare had acquired among famous virtuosos due to his work as a restorer and tone regulator. His son William Arthur Beare learned the art of violin making under Marc Laberte in Mirecourt and later very capably headed the company until 1945. In 1961 Charles Beare joined the company after learning his trade at the Mittenwald school of violin making and under Rembert Wurlitzer in New York. Charles Beare grew to be an eminent authority on antique instruments. That the company survived the turbulent 20th century is due in part to his outstanding expertise. 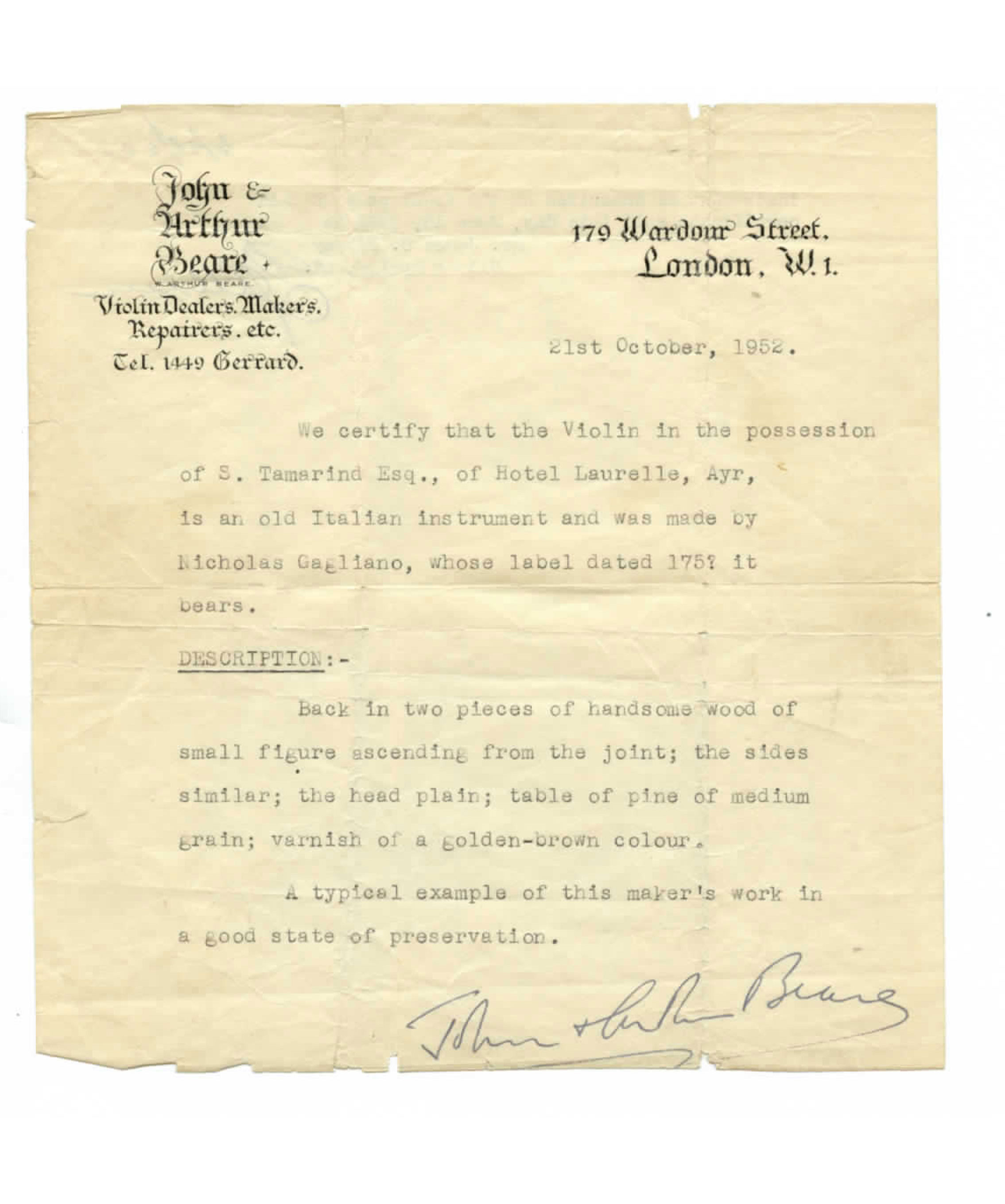 The changes that took place in the world of stringed instruments during that period were radical in the extreme: When Charles Beare embarked on his career, a good orchestra musician could generally manage to afford an old Italian master violin; by the end of the millennium, such instruments had become objects of speculation, and their prices had increased by a factor of 150 to 200, as Charles Beare recounted in an interview with "The Strad" in 1997. Whilst his company undeniably benefited from this development, he long observed with concern that the best historical instruments were increasingly unavailable to modern musicians. In many instances, Charles Beare has helped to overcome this problem by facilitating unusual instrument sponsorships for outstanding soloists, including such great names as Jacqueline du Pré, Nigel Kennedy and Yo-Yo Ma.

Charles Beare‘s high repute as an author is significant too in the context of the highly speculative market for stringed instruments. Experts who have personally examined authentic original violins made by great luthiers have always been something of an exception; today they are even more of a rarity now that such instruments have become financial assets which seldom change hands. Inspecting historic violins at first hand, an indispensable means of cultivating true expertise, is even less possible today than it was when Charles Beare completed his training. In his famous book on the forty-four instruments shown at the great Stradivari exhibition in Cremona in 1987, and in his many contributions to the New Grove Dictionary of Music and Musicians, Charles Beare imparted some of his extensive knowledge to the interested public.

The latest chapter in the history of John & Arthur Beare began in 1998 when the venerable firm incorporated Morris & Smith, a violin dealership in London, to become what is now known simply as Beares. Many areas of expertise are covered by the present Beares management, which includes cellist Simon Morris, violinist Steven Smith, Frances Gillham, the former director of Christie’s — as well as Charles Beare and his son Peter, the youngest Beare at Beares, who learned his trade at the Violin-Making School of America in Salt Lake City. Upon his return to the Beare family business Peter Beare worked as a restorer, and he later deepened his knowledge during stays with Etienne Vatelot in Paris, with Premysl and Jan Spidlen in Prague and with Carl Becker in Chicago. Peter Beare turned his focus to making new violins, an important activity at Beare’s led by Christoph Götting since the late 1980s. With his first-rate, internationally acclaimed instruments Peter Beare continues to write the success story of his family’s business "Beares", which celebrated its 150th anniversary in 2015.

Library - text about the history of stringed instruments