The 1840s marked the beginning of the history of the great Bazin family of bow makers in Mirecourt, artisans who were active for four generations and shaped French bow making for more than a century. True masters of their art, the turbulent history of their era left its mark on their lives. In contrast to many bow makers of his time, François Xavier Bazin began his career under rather auspicious circumstances. Born in Mirecourt on 10 May 1824, the founder of the Bazin bow-making dynasty learned his craft in Paris from Dominique Peccatte and J. B. Vuillaume, who were among the most respected masters of the day. When Bazin returned to Mirecourt in 1845, married and opened his own atelier, these famous names must have opened many doors to him – if, indeed, they were not already open due to the good relationships that his father, dispatcher Joseph Eustache Bazin (1785-1863), maintained with the city’s instrument makers. 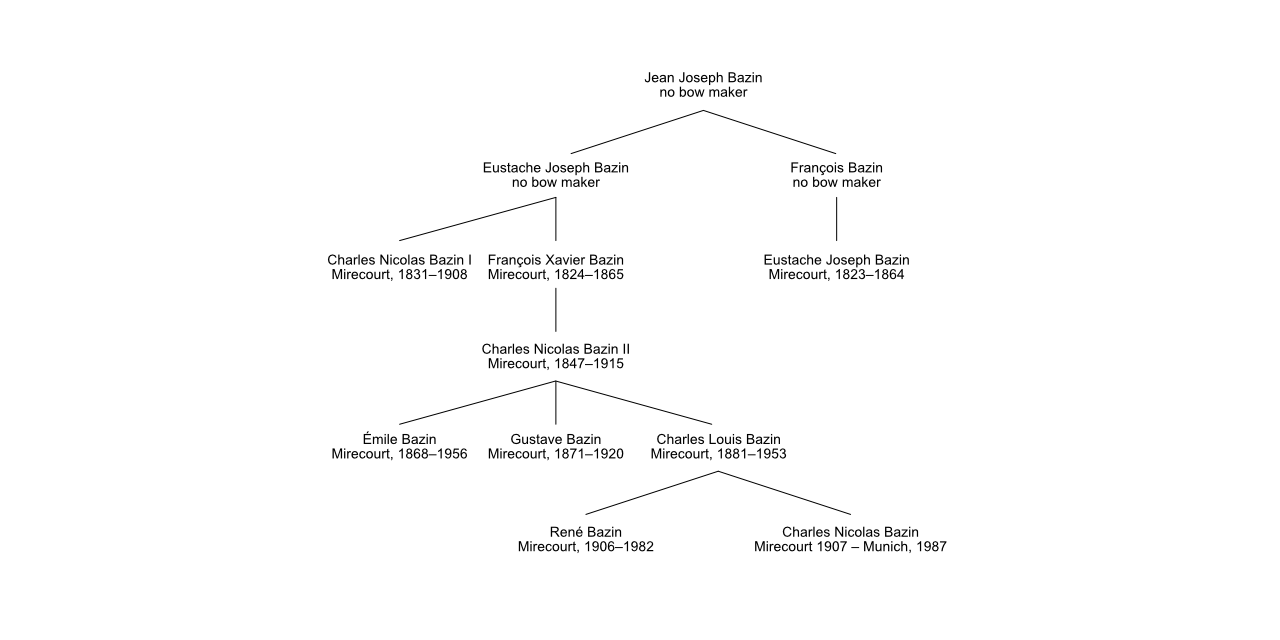 François Bazin was a true student of his teachers, and his bows therefore remained typical examples of the Peccatte school until around 1860. It was not until his son Charles Nicolas Bazin joined his atelier did the work of father and son begin to grow closer to the Voirin model. However, before things could fully develop in this direction, François Bazin fell victim to a cholera epidemic in Mirecourt on 1 August 1865. Charles Nicolas Bazin, just 18 years old, was forced to take over his father’s atelier prematurely, in addition to putting food on the table of his own family; his first child was born in 1868. Under such circumstances, it was clear that he did not have room to further develop his own style. At first he continued to work according to his father’s old bow model and to use his stamp. However, Charles Nicolas Bazin ultimately proved himself a worthy heir and by 1880 had established himself as a successful businessman and a respected citizen of the town. In the last two decades of the 19th century he began once again to pursue his own bow model, paying particular attention to refining the heads of the bows – which now were marked with a new stamp, C. BAZIN. After the turn of the century, his staff of up to 17 employees produced an estimated 2,000 bows or more per year, and he ran a very successful business selling materials and prefabricated parts for bow making.

Overview: “The violin bow": a brief depiction of its history