The Gagliano family and violin making in Naples

The Gagliano family of luthiers have a remarkable standing in the history of their craft. Their profound influence is due to their superior artisanry and the innovative influence of the masters they produced, the unusually long continuity of their family tradition – and last but not least, the many excellent-quality and rich-sounding instruments which helped define the understanding of the Italian violin. To this day they continue to enrich the world of music in the hands of outstanding soloists.

Alessandro Gagliano was the pater familias of a violin-making dynasty and considered the founder of the craft in his home town of Naples. Like many of the great personalities in the history of violin making, countless legends swirl around the story of his life and the origins of his art. For example, the Russian nobleman, diplomat and art collector Nicolai Borisovich Yusupov – who, by the way, had the rare honour of being one of the owners of the famous Ex-Lipiński violin by Guarneri del Gesù – told the entertaining tale about winning a duel against the young Alessandro, who then had to seek refuge in the forests of northern Italy and passed his time there by trying his hand at crafting instruments; this later inspired him to become an apprentice under none other than Antonio Stradivari in Cremona. Although the story of fleeing into the woods was never taken particularly seriously, for quite some time musical literature perpetuated the assumption that Gagliano trained with Stradivari, and this thought was further supported by Alessandro Gagliano’s labels, which proudly declared that he was an “alumnus Stradivarius.” In light of the distinctive nature of his violin model and his technique, however, this is no longer thought to be true.

Like many other details about the history of the Gaglianos, whose biographical data remained largely unresearched until fairly recently, it was also unclear for quite some time who Alessandro Gagliano learned his trade from. It may have been masters from Füssen, Germany such as Jacob Diefenbrunner or Christoph Railich, both of whom were active in Naples as lute makers and thus may have been his predecessors or teachers. There is, however, no proof of these assertions.

Nicolò Gagliano (Nicolo I) and the Stradivari heritage

Nicolò Gagliano (Nicolaus Gagliano) is regarded as the most influential violin maker of his family, even though his brother Gennaro and son Giuseppe were his worthy peers as masters of historic and style-defining relevance. Whereas Nicolò’s father and teacher Alessandro worked with a violin model that showed no major influence from the violin making tradition of Cremona, Nicolò Gagliano’s oeuvre demonstrates a profound understanding of Antonio Stradivari’s work and a comparable sense of innovation. His craftsmanship attained standards which led some his violins to be incorrectly seen as authentic Stradivaris. The fact that his personal accomplishments thus did not receive scholarly attention until rather late in no way diminishes the outstanding reputation which his violins and the few surviving Gagliano celli have earned in the world of music to this day. 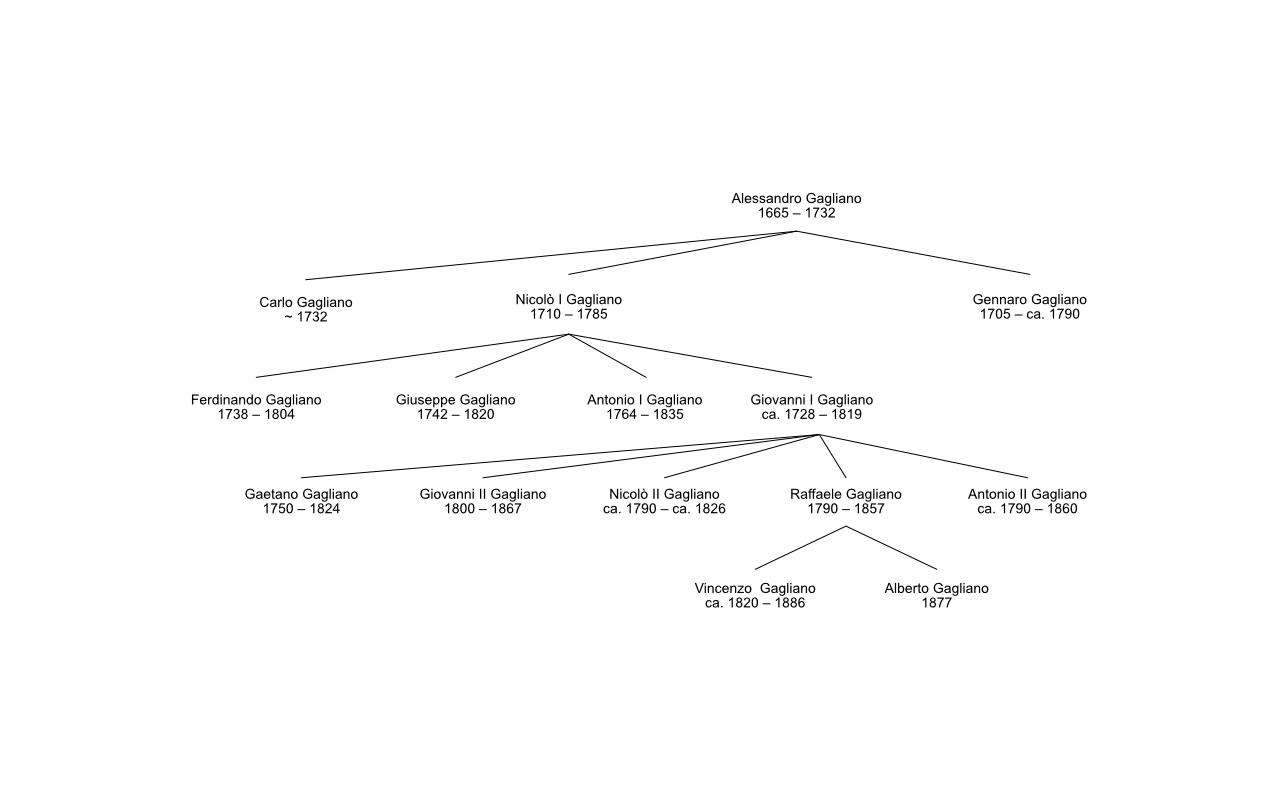 Experts rank Gennaro Gagliano (Januarius Gagliano) higher than his older brother Nicolò, although the ranking given to these historic violin-making luminaries is an issue of subordinate importance given the quality of their oeuvre. Both brothers share an orientation towards the great Cremonese masters, but Gennaro’s creativity was not particularly evident as a further refinement of the powerful Stradivari model. Instead, his mastery was more apparent in his personal style, the unmistakable elements of which especially include the interplay of colours in his varnish. Furthermore, based on the conclusions that can be drawn using surviving instruments, Gennaro appears to have been more interested in Amati’s violin model than Nicolò was.

Both brothers ultimately focused on crafting top-tier celli with great success, and in this genre they not only made instruments which to this day are amongst the finest ever created. The Gagliano brothers also defined a more narrow cello model which went onto become characteristic for Neapolitan violin making.

The Gagliano family’s artisanal tradition took root in the work of Nicolò Gagliano’s three sons and matured into the Neapolitan school which gave Naples its status as the second most important historic centre of Italian violin making after Cremona. Ferdinando, Antonio and Giuseppe Gagliano were trained in one of the world’s finest workshops. Although detailed information about the collaborations between the two generations is not available, Ferdinando does not appear to have learned his craft from his father, but rather from his uncle Gennaro, whose style and approach to work is clearly evident in Ferdinando’s instruments – unlike Giuseppe, who was trained by his father Nicolò.

Even though there was a great deal of continuity within the family style, this generation nevertheless created its own accents and made them a permanent part of Neapolitan tradition. One example is the typically curved shape of a peg box with a delicate scroll which harkens back to Giuseppe Gagliano and was cited in Naples well into the 20thcentury.

Despite the fact that Giovanni Gagliano as Nicolò’s son  was part of the third generation of his family, he is often counted as belonging to the fourth generation in scholarly literature. For one thing, all of the members of this generation were his sons; for another, the links between his work  and their work are much closer than to that of his brothers.

One hallmark of the fourth generation of the Gaglianos is a particular trend towards simpler, more streamlined and thus more cost-effective processes. Compromises in the quality of the tone woods, backs without purfling, and less attention to detail in the peg box, scroll or purfling were not the effect of any lack in talent or training; instead, these shortcuts are to be seen as pragmatic concessions to the era of rising industrial manufacturing of instruments in the late 18th and early 19th century. They were a way to accommodate the conditions of a changing market.

The family’s typical style still manifest itself in individual pieces, however, and even many of these simpler works regarded as superficial and lacking in distinction had a surprisingly good Italian sound. In their own way, they showed that Giovanni had been the beneficiary of outstanding training under his uncle Gennaro – which is why he referred to himself as “Nepos Januarius,” “Gennaro’s nephew” on his labels – and he certainly shared this heritage with his descendants.

The family left the violin-making tradition after nearly 200 years with Vincenzo Gagliano, a son of Raffaele and the great-great-grandson of Alessandro Gagliano, who had dedicated himself to creating strings.