The Ouchard family made bows which kept the French tradition of their craft alive while perpetuating conflicts that lasted for generations.

The relationship between a master and an apprentice is essential when it comes to the rigours of fine craftsmanship, and it is more than a peripheral detail of music history to discuss who guided a violin maker or bow maker during their formative years. Transferring knowledge, sensibility and experience is a process of great intimacy which goes to the very heart of masters’ and apprentices’ art and craft – and it thus has to be defined by good interpersonal relations, or so one might think. A major counterexample, however, is the family and professional history of the Ouchards, the great French dynasty of bow makers which spanned three generations. Their name is interlinked with that of other major families such as the Charpentiers, Collins and Lottes, and the Ouchards made exceptional contributions to music despite several significant conflicts. Furthermore, the scope of their influence in the mid- 20th century reached all the way to the US, even though this took place on a more coincidental basis. 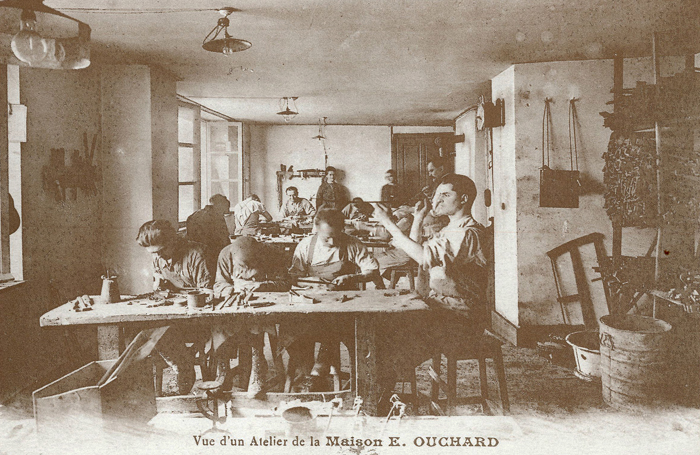 Ouchard père and Ouchard fils: working as a family, fighting like cats and dogs

Émile François Ouchard was born the son of Adèle Margeruite Ouchard on 30th April 1872; he hailed from a long line of wood turners, instrument merchants and luthiers. His mother, who never married, passed down the name that the man later known as Ouchard père would later hand down to his own family. At the age of 14 Émile François Ouchard began his apprenticeship under Eugène Cuniot at the Cuniot-Hury atelier. After Cunoit’s death, Émile François Ouchard took over the business together with the widow Cuniot, née Hury. With Joséphine Collin, whom Ouchard père married in 1896, he had nine daughters and a son named Émile Auguste Ouchard. The latter chose to walk in his father’s footsteps and began studying with Émile François Ouchard from 1913 on.

Ouchard père and Ouchard fils worked together for nearly 25 years; from 1923 onward they were colleagues at Émile François Ouchard’s atelier, where Ouchard père employed up to 15 people at times. Things were not particularly harmonious between father and son, however: if the anecdotes are to be believed, Émile François and Émile Auguste were both highly impulsive and strong-willed characters. It seems that there were repeated confrontations, especially about the issue of compensation: Émile François Ouchard refused to engage in any kind of preferential treatment versus other employees, much to his son’s consternation. In 1937 Ouchard fils took over the business, although his father remained active. Finally, at the age of 30 Émile Auguste Ouchard decided to move to Paris and open his own studio there.

From 1940 until his death on 27th February 1951, Ouchard père ran his business alone again; he never left his hometown of Mirecourt. From 1923 on, he produced high-quality bows stamped most frequently with “Émile OUCHARD,” although some read only “CUNIOT-HURY.” Several well-known bow makers served as his apprentices, including Paul Audinot, Louis Brugerè, François Lotte, Marcel Mangenot and many others. As demanding and strict as he was, Émile François also laid the foundation for the fame and high esteem which his successors still enjoy to this day.

In Paris, Émile Auguste Ouchard established himself quickly. Even during his time back in Mirecourt, his work gradually became more and more liberated from his father’s design standards. Furthermore, after Max Millant’s encouragement, he designed a special slide made of metal which was a revised version of the Hill slide: it created great stability and durability of the frog by minimizing the space between the frog and stick. He continued to develop his skills in Paris, enhancing his style and continuously increasing the precision with which he crafted his bows. Within a short time he had made a good name for himself, winning the Grand Prix at the 1942 International Paris Exhibition.

The exact details of the family-related circumstances are not known, but Ouchard fils decided to strike out for the New World in 1946. As was the case for so many European émigrés, his first stop was New York, where he worked as a self-employed bow maker at Lazare Rudié’s atelier. In 1948 he signed an exclusive contract to manufacture bows at William Lewis & Son in Chicago; in reality, however he also continued to craft bows on his own time and sold them during his annual trips to Paris. After 13 years in Illinois, Ouchard fils ultimately returned to his native country, settling first in Gan, and then in Cognat-Lyonne (Allier) near Vichy, where he opened his own atelier. One of his most notable achievements in this time was a bow model he created that was identical for violin, viola, cello and bass; it could only be matched to the proper instrument by comparing dimensions. The stroke Émile Auguste suffered shortly after his return had a strong impact on his craftsman precision and productivity, which had been excellent up to that time. Nevertheless, he continued to work until his death in Gan on 14th February 1969. His works are stamped with the names “E.A. OUCHARD Fils,” “E.A. OUCHARD PARIS,” “Émile A. OUCHARD – NEW YORK” or, during the final phase of his career, “Émile A. OUCHARD,” and to this day they remain in high demand amongst demanding musicians and collectors.

Émile Auguste’s first marriage to Andrée Marie Charlotte Petot brought forth four children, including sons Bernard and Jean-Claude Ouchard who continued the family tradition. Jean-Claude Ouchard, the younger of the two, was born on 6th May 1935; from 1949 on he was trained by no less a figure than Louis Bazin and subsequently by his uncle, François Lotte. Jean-Claude Ouchard also worked abroad for several years, first in New York and then, after a brief intermezzo in Mirecourt, in Amsterdam, where he specialised in restoring bows. Beginning in 1968, however, he lived in France again, where he continued to work until his retirement: partly as a teacher, partly as a freelancer and ultimately as an employee of the Cablé company.

His older brother Bernard Ouchard (15 February 1925 – 2 June 1979) appears to have been the one to leave a larger legacy; musicians regard him as one of France’s greatest bow makers. Like Ouchard fils, Bernard Ouchard began an apprenticeship under his father at the age of 13. In 1941 he went with Émile Auguste Ouchard to Paris, where they worked together until he joined the French army towards the end of WWII. After the end of the war, however, they parted company: in lieu of going to America with his father, who apparently was a very different character, the rather introverted Bernard Ouchard stayed in Paris for a few more years. This father-son relationship did not appear to be a particularly harmonious one either. Afterwards he worked for Alfred Vidoudez in Geneva for over 20 years until he was called to Mirecourt in 1971 as a professor of bow making. There Bernard Ouchard contributed to training a new generation of talented young bow makers who went on to revive traditional French bow making. This return to classic historic approaches – e.g. to Tourte and Peccatte – and his faithful transfer of these principles ranks is perhaps the greatest part of Bernard Ouchard’s enduring heritage. Luminaries such as Benoit Rolland and Stephane Thomachot were amongst his many students. Most of his pieces bear the stamp of the Vidoudez company; only a few are labelled “OUCHARD.” Bernard Ouchard died in 1979 in Vittel.