Notes on Jean-François Raffin, one of the leading experts for French violin bows worldwide

Jean-François Raffin ranks among the most highly regarded experts for French bows, and together with his teacher, Bernard Georges Louis Millant, he published the reference work “L'Archet.” Born in Paris on 20 May 1947, J.F. Raffin began his career during a period in which French violin and bow making was undergoing profound changes. After World War II, France's musical history experienced a long phase of stagnation in which many instrument makers could not re-attain their previous greatness. One example of this is the history of the prominent Bazin family of bow makers. Their story also serves as an illustration of how the artisan trade reoriented in the 1950s to 1970s, an epoch which shaped the path of Jean-Francois Raffin. In 1968, as a young man, Raffin travelled to Mirecourt to begin his apprenticeship under Jean Eulry (28 June 1910-5 May 1986), the great master teacher in modern violin making. As Raffin later described in “L'Archet,” his training there was entirely in keeping with the old French craftsman tradition: “ten hours straight at the bench and ... «not a word».” In 1970 the National School of Violin Making was founded, and by the time J.F. Raffin graduated in 1971 as one of the first ever to complete the program, a new period had already dawned. 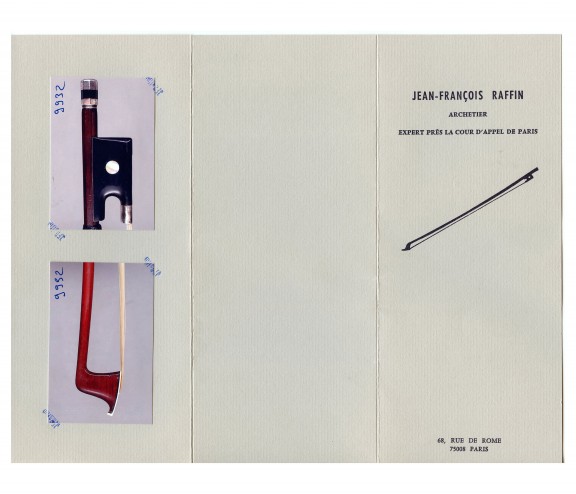 JF Raffin initially worked as a journeyman for Etienne Vatelot (b. 13 November 1925), the founder of the Mirecourt violin-making school, but within short order he was hired by Bernard Millant (b. 13 May 1929) in Paris in 1972. There he learned the art of making bows, which would emerge as his true calling. In the seventeen years he spent under Millant, Raffin studied the old masters of bow making; he later opened his own shop in 1989 in Rue de Rome No. 68, remaining right in Bernard Millant's neighbourhood. His wide-ranging knowledge of French bow making helped J.F. Raffin quickly become a sought-after expert, so much so that his own work, which was patterned after the classics of the 19th century, faded into the background. In 1996 he was appointed an appraiser at the appellate court. The highlights of Raffin's lifetime oeuvre include his appraisals and restorations of historic master bows, as well as his extensive two-volume work “L'Archet,” which was written from 1996-2000. As a teacher, he also influenced many important bow makers of the younger generation. A look at Raffin's website give readers a glance at the current projects of a man who remains active even in retirement.