Vatelot-Rampal: on the art of healing violins

One could quickly name the top addresses of the violin-making world, those select few experts who specialize in the finest and most valuable instruments and who enjoy unreserved recognition. Two such addresses are in Paris, their doors just a five-minute walk apart: that is how close the workshop of renowned bow-making expert J. F. Raffin (68 Rue de Rome) is to "Maison Vatelot-Rampal" (11 Rue Portalis), an atelier which has been sought out by world-class soloists for decades.

The workshop founded by Marcel Vatelot in 1909 has stood in the same spot for more than a century. As with many great French violin-making dynasties, the roots of the Vatelot family extend back to Mirecourt, the heart of French instrument building in the Vosges Mountains. There in the town from whence many of his ancestors came is where Marcel Vatelot received his training, in apprenticeship to Eugène Poirson and Gustave Bazin. In Paris he rose to become a highly esteemed expert and consultant, not least through the good contacts to musicians that he gained through his wife Jeanne, daughter of cellist André Hekking. 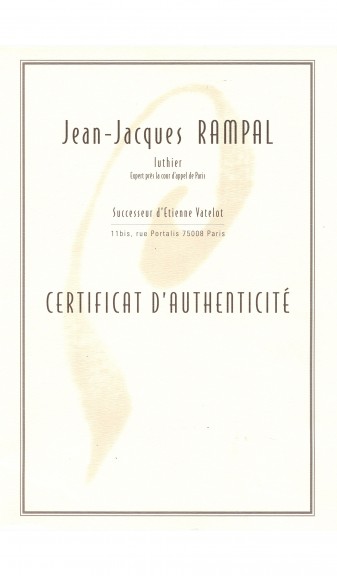 Despite his father’s success, Etienne Vatelot, Marcel’s son (born in 1925), first aspired to be an actor or a pilot. Thanks to his father’s affectionate persistence, he finally yielded and – like Bernard Millant, who is just a few years younger – went to Mirecourt in 1946 to begin an apprenticeship under Amédée Dieudonné. After a short stint with Rembert Wurlitzer in New York, he returned to Paris to join his family’s atelier.

Although the 1950s were a difficult period for musicians and violin makers in France, Maison Vatelot Rampal became a rendezvous for the greatest international string musicians. Names such as Pablo Casals, Yehudi Menuhin, Slava Rostropowitsch, Yo-Yo Ma and Anne-Sophie Mutter left their indelible mark on the extraordinary history of this atelier. Etienne Vatelot’s highly developed instinct for the sound of string instruments may be credited as the key to this success. An avid concert-goer, he likes to describe himself as a doctor whose job is to diagnose what ails a violin – in order to heal it. His self-conception easily explains why so many eminent musicians have returned to Etienne Vatelot over and over again: people remain loyal to a doctor whom they trust.

After Etienne Vatelot took over its direction in 1959, the Rue Portalis atelier became a training centre for 50 outstanding violin makers and restorers. His most important staff member was Jean-Jacques Rampal, son of Jean-Pierre Rampal, a famous flute player. Jean-Jacques Rampal (born in 1954) joined the atelier in 1983. He had also received his training in Mirecourt, in apprenticeship to Jean-Jacques Pages, after which he worked in London under Charles Beare in London before returning to France. Working closely with Etienne Vatelot, J. J. Rampal became an expert of equal rank and was appointed as a consultant to the Court of Appeal. Jean-Jacques Rampal became Vatelot’s successor in 1998 and has headed Maison Vatelot-Rampal ever since. However much the world of violin making may have changed over the course of Etienne Vatelot’s long career, the elderly master simply wishes to keep returning to his workshop till the end of his days, just as his father did – to see old violins be restored with great care as though by a good doctor, now through the hands of Jean-Jacques Rampal.