Rarely is the present-day manifestation of a 500-year-old art form as intensely tangible as at major international violin making competitions. They are an outstanding opportunity for world-ranking masters, especially those in the younger generation, to demonstrate their abilities and their appreciation of tradition and quality. Which acoustic and technical criteria are the defining standards of our time, and where will we encounter tomorrow's greatest talents? Below you can find our selection of important international violin making competitions, the instruments they focus on, and the rules and regulations. 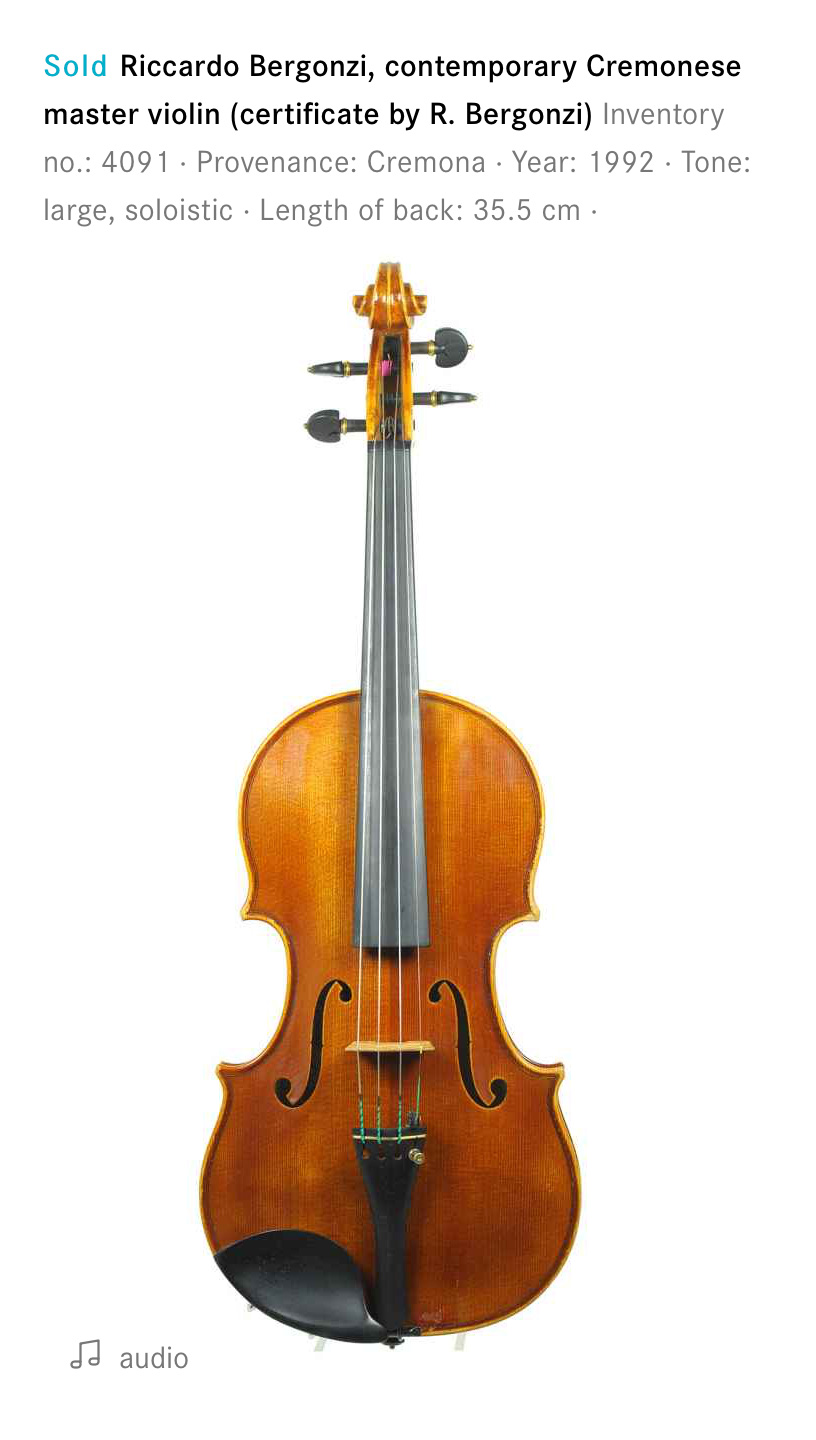 Since 1976, Ente Triennale Internazionale Strumenti Ad Arco, Cremona, the most significant of all international violin making competitions has been held in Cremona, the place where the creative and acoustic benchmarks of violin making were first developed and still live on today. Once every three years in September/October, "maestri liutai" from around the world have their instruments judged at Ente Triennale by a panel of five violin making experts and five musicians. Up to two stringed instruments each can be submitted to Ente Triennale in the categories violin, viola, cello and bass; they may not be more than three years old, must not be artificially aged, and have to meet traditional design standards. As a rule, applications have to be sent to Fondazione Stradivari, Museo del Violino, via Bell´Aspa n. 3, Cremona, Italy, by late April. Further information available on the website www.entetriennale.it (Italian only)

Nestled between the Karwendel and Wetterstein mountains, Mittenwald has hosted the internationally renowned Mittenwald violin making competition every four years since June 1989. Unlike the Cremona violin making competition, here the twelve-member jury not only reviews the best violins, violas and celli but also judges bows, and all of them have to have been completed within the previous two years. Replicas and stringed instruments which do not comply with traditional craftsman standards may not be submitted to the Mittenwald violin making competition. Each participant may entire up to three works in different categories. Current rules and regulations are available at www.geigenbauwettbewerb-mittenwald.de

Luby (Schönbach), a traditional violin making town in the Czech Republic, saw its instrument making school moved to Cheb in 2005, but nevertheless the first international violin making competition for school students and apprentices was held in Luby that same year. What makes the Luby violin making competition remarkable is that not only may luthiers enter violins patterned after Stradivari or Guarneri models; they can also submit works in progress which were crafted as part of a two-day, hands-on workshop open to the public. In 2012 another international instrument competition was held in Luby, featuring the categories violin, concert guitar and western guitar.

Violins are the only instruments reviewed by the jurors at the Polish Wieniawski competition, which was first held in 1957 and is the oldest of its kind. The Henryk Wieniawski Musical Society holds the event approximately every five years. Like the eponymous violin competition, which has an even longer history, the Wieniawski contest has a solid international reputation. The rules and judging criteria are similar to those of the Cremonese Ente Triennale, and the three top instruments win monetary prizes. The 13th Wieniawski competition is scheduled for May 2016, with Roger Hargrave slated to lead the jury. The application form is available at www.wieniawski.com.

The BVMA International Violin and Bow Making Competition was first held in 2004 in London as part of "The Genius of the Violin Festival" of the Royal Academy of Music; over 350 violins and bows were judged for tone and craftsmanship. The BVMA Competition is only one of the many ways that the British Violin Making Association (BVMA) has been helping its members pursue continuing education and share ideas since 1995. To do justice to the subjective nature of such contests, each member of the BVMA competition jury awards his or her own prize. Modern pieces and replicas alike may be entered.

The Concours Vatelot is another internationally important violin making competition which emphasizes highlighting the best examples of contemporary artisanal violin making. To date, there have been four Concours Vatelot contests held in 1991, 1999, 2004 and 2011 at which a jury of five violin making experts evaluated violins, violas, celli, basses and the corresponding bows for their maturity of style, dexterity of handwork and sound quality. There is only one major prize per category; the second prize wins a diploma of honour. Up to two works per participant may be presented at the Concours Vatelot. Registration information and documents are under www.civp.com.

With its focus on antiqued instruments and replicas, this violin making competition in the Lombard town of Pisogne is quite unique. The 2014 Pisogne violin making contest was the fifth to be held. Non-professional violin makers and students of the craft can also enter their works, and the judging is divided into three rounds and based on acoustic and technical and artistic qualities. The three top candidates receive medals. The application form is available at www.anlailiuteria.it or www.stradivari.it (both sites Italian only).

The growing influence that China has attained in the stringed instrument making industry over the past few years is evident in the the two events of China violin making competition which were held so far in Bejing 2010 and 2013. The 2013 China violin making competition in particular was widely acclaimed: it was much greater in terms of the scope and number of participants, and no fewer than 18 jurors evaluated traditionally designed violins, violas and celli as well as violin, viola, cello and bass bows to assess their artisan craftsmanship, artistic execution and acoustic merits. The next China violin making competition is scheduled for 2016. Up to three stringed instruments in a maximum of two categories or up to four bows in one category are allowed. The application form can be found at www.civmc.com.

The Strad competition - Beginning in 1988, Manchester began hosting the International Cello Festival of the Royal Academy of Music every other year. American cellist Ralph Kirshbaum founded the event and remained the artistic director of the festival until its 2007. In parallel to the Manchester International Cello Festival, cello and bow makers from all over the world can present their works to a jury of specialists.

As the fifth discipline of the legendary international Tchaikovsky Competition, the violin making competition "Violin: Soul & Shape" has been held in Moscow since 1990. The Violin: Sound & shape event takes place at four-year intervals and is held before the main competition. Classic styles of violins, violas, celli and bows which meet the usual design guidelines may be submitted, as can replicas of historic instruments and bows as well as "free forms" with no limitations on the shape, material and colours; they fall into the subcategories of acoustic and electronic instruments. The three best pieces win medals, and special diplomas may be given as well. There is no age restriction on stringed instruments submitted. The Violin: Sould & Shape application form can be downloaded at www.violin.soulandshape.ru.

The VSA violin making competition of the Violin Society of America has been held every year since 1973, making it the world's most frequently held event of this nature. The VSA competition takes place every summer at different venues throughout the US and enjoys international repute. Individual stringed instruments and the corresponding bows can be submitted to the VSA competition, and entire quartets can also be evaluated (co-productions are permitted). Multiple gold medals may be awarded if the jurors are unanimous. The adjudication criteria include artistic merit, workmanship and tone. Online registration for the VSA competition is available at www.vsa.to/conventions-competitions

Stephan von Baehr and the architecture of the violin

Patrick Robin - a master of teaching an the craft