About Mittenwald violins, their violin makers and the history of violin making in Bavaria

How and why violin making came to Mittenwald is still not fully understood, even though a great master of the craft, Matthias Klotz (1653-1743), was known to be a key figure in the early days. The history of violin making loves its founding fathers, whether they be the mythical Tywersus of Mirecourt, the legendary Andrea Amati of Cremona or the patriarch of Vogtland violins, Caspar Hopf. The stories of these men's lives include genius and legend, and fittingly enough, some aspects remain in the dark. An intriguing veil of obscurity has also been drawn across parts of Matthias Klotz's biography: how did this tailor's son find his way back home after training in Padua? Where and for whom did he work in this period? What knowledge and influences did he absorb? And did he visit the great Jacob Stainer during his travels? 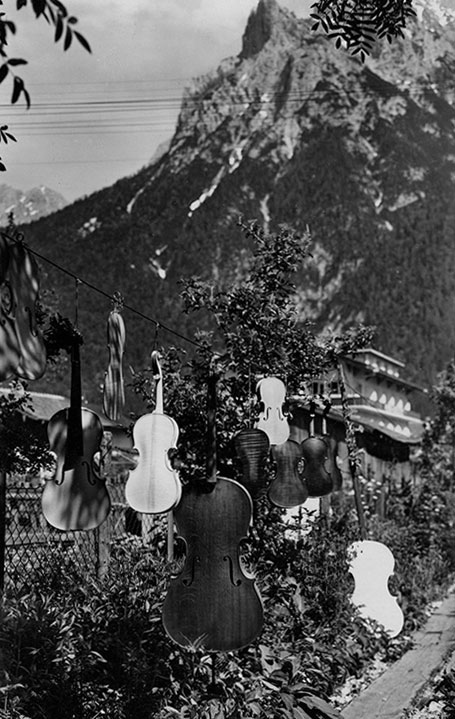 The state of early violin making in Mittenwald

Economic history gives us more plausible reasons as to why Mittenwald as Germany's second violin making centre (along with Markneukirchen) emerged in a Bavarian outpost that was quite literally “mitten im Wald,” in the midst of the forest. While the expertise of Bohemian immigrants formed the cornerstone of the violin making industry in Markneukirchen, there were very different and quite advantageous conditions for making violins in Mittenwald. The altitudes of the Karwendel mountains yielded excellent tone wood; the town was located along the trade routes from Augsburg south to Bolzano and Venice, providing good opportunities for international sales; and last but not least, the location provided an opportunity to learn from the prominent masters in Tirol and northern Italy. It is no coincidence that the violins of the Klotz family, which shaped Mittenwald violin making well into the 1800s, reflected the traditions of Stainer and Amati.

Selling instruments in Mittenwald quickly took on a professional character: the first presumed “publisher” (i.e. broker) J. Baader hired a dependent violin maker in 1707 (Violin by J.A. Baader & Co.). J. A. Baader & Co. became the most important violin maker in Mittenwald along with Neuner & Hornsteiner (Neuner & Hornsteiner violin). As was the case elsewhere, Mittenwald violin making became industrialised in the 19th century to meet the high demand for simpler and more affordable instruments. In light of the growing specialisation and division of labour, King Maximilian II of Bavaria took steps to protect the craftsman knowledge that was the fruit of many generations: he founded the Mittenwald violin-making school.

The new era of Mittenwald violin making after the wars

After WWI, the violin making industry in Mittenwald collapsed. It was not revived until after WWII and was distinguished by violins of outstanding quality. Nowadays visitors can tour the town's violin-making museum with its excellent collection and learn about Mittenwald violin makers and the history of Mittenwald violins.

The Mittenwald violin making competition and other contests

The violin wolf tone: Taming the wolf in a stringed instrument