The history of Baroque violins raises questions that cannot be easily answered: A look at a phrase that was retroactively coined

The Baroque violin has never been as popular as it is in our day: the status of Baroque stringed instruments has been growing since the 1950s, in tandem with the way historically informed performance has progressed from being something revolutionary to a widely-acknowledged approach to interpreting such music. The sound of the Baroque violin – “quiet but with a sweet sharpness,” as Nikolaus Harnoncourt stated – has long since become more than merely a favourite topic in circles dedicated to historical music. Instead, the sound seems to fit in well in an epoch such as ours which is loud and acoustically overloaded. It is easy, however, to overlook the fact that even the term “Baroque violin” itself is young and dynamic at least if it is understood to mean more than an instrument with catgut strings. 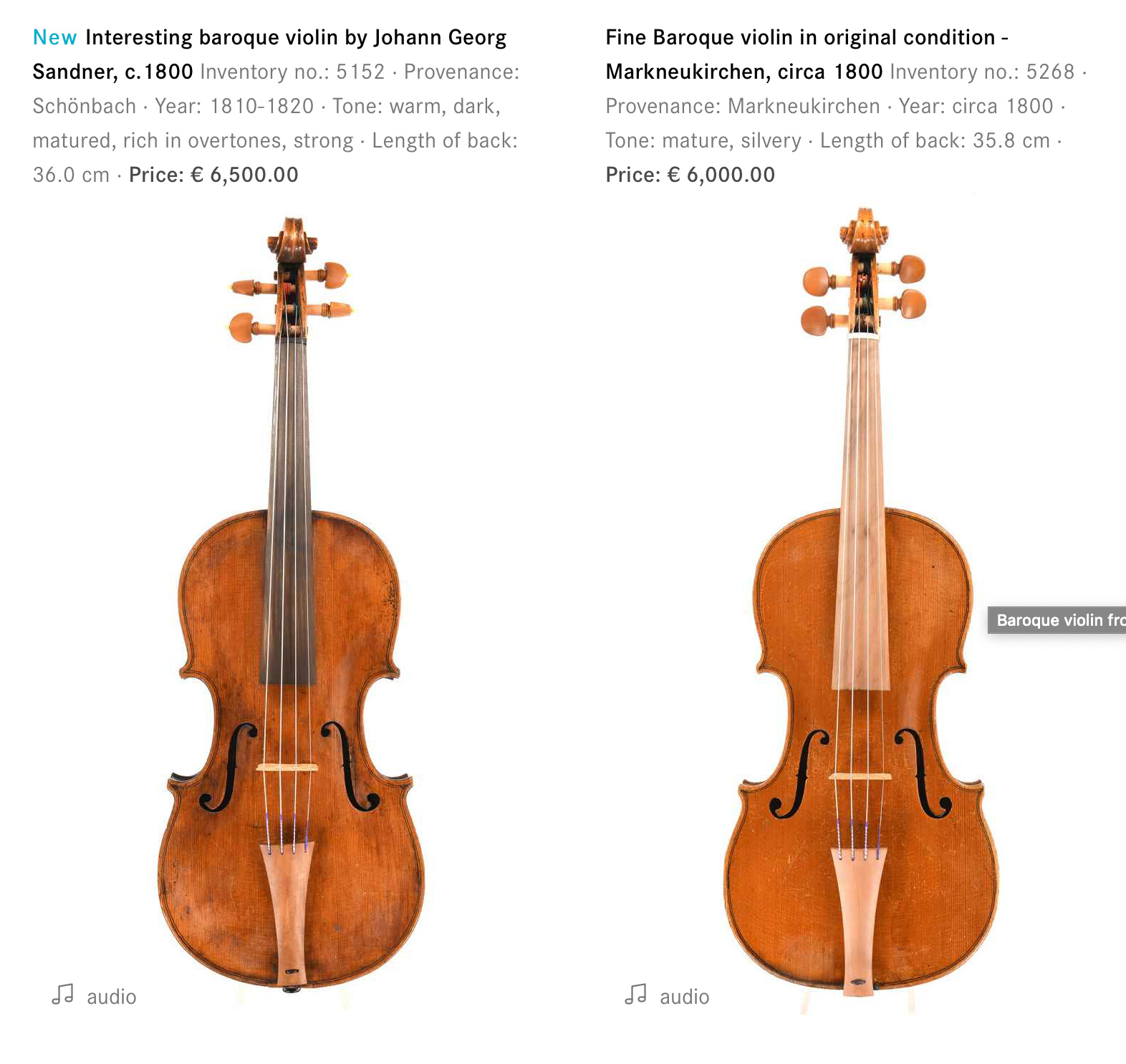 Like many other historical phrases, the “Baroque violin” is a retronym — a collective term that only emerged once innovations in 19th century violinmaking created a distinction that set newer stringed instruments apart from older Baroque ones. The idea not only assumes the end of the "Baroque age,” it also assumes the beginning of the modern violin standard, a style which began to assert itself in the second half of the 18th century. By the early 19th century it had largely reached its fruition and become the kind of instrument we know today.

It is noteworthy that the dates of Baroque music do not coincide with the “Baroque” violin-making period, yet at the same time, the two cannot be regarded independently of one another. As was the case in the history of the bow, new musical interests spurred on improvements to the instruments' design, which in turn encouraged even further musical development. During the Renaissance period, the music played at representative events at court and church had to meet greater acoustic demands, and this probably provided the key impetus for the violin to be modified. The resulting changes created a major foundation upon which Baroque music evolved. In the workshops of Stainer, the Amatis, Antonio Stradivari and Guarneri del Gesù, a long evolution was reaching its culmination, yielding instruments with highly refined acoustic qualities. Concurrently, the composers of the Bolognese school, the court in Mantua and no less a figure than the great Arcangelo Corelli were also taking decisive steps in the virtuoso stringed music of the early Baroque period.

Distinctions between Baroque and modern violins

In the 18th century, the aforementioned series of mutual influences pushed the prevailing standards to their limits in the world of stringed instruments. The absolutist rulers of the day had a growing desire to be culturally represented, and after the French Revolution new bourgeois performance standards became commonplace: both factors shaped the need for greater volume. Larger concert venues and ensembles also prompted experimentation amongst luthiers to meet the higher demand for instruments with more powerful voices, such as those of Stradivari and Guarneri, unlike the quieter violins by Nicolo Amati and Jakob Stainer. The first changes were made to the thickness and vibrating length of the violin strings; modifications here automatically meant that the height of the bridge had to be altered. In turn, higher bridges increased the pressure of the strings. This had a negative effect on the stability of the neck, which until that time was only glued on and nailed through the upper block. The result was the most visible trait that separates modern violins from Baroque violins: the neck is now set into the upper block at an angle, and the fingerboard is much lengthier and no longer needs to be positioned from underneath with a wedge. These modifications naturally had an impact on the interior of the violin body as well. Back in the Renaissance, luthiers were looking for a way to secure the top against the greater pressure from the strings, and in doing so they coincidentally discovered the positive effects that the sound post and bass bar had on the way the entire instrument reverberated. The "new" physical properties of more modern violins called for louder voices and longer, stronger bass bars. The latter were no longer fashioned out of the wood used for the violin's table, but glued on instead. At the time no one was aware that these fundamentals of modern violinmaking helped define what constitutes a Baroque violin, even if the definition is a retroactive one that encompasses the sum of an antiquated earlier style. Other revisions in the design of instruments reinforced the legitimacy of this new violin standard.

The Baroque violin and the new interest in old music

Most notably, they were the shift from catgut strings to steel wound or synthetic ones in the 20th century, and the gradual increase in concert pitch. At nearly the same time, a revived interest in historical music and the related instruments emerged, as could be seen in the founding of early 20th-century ensembles such as the “Société de concerts des instruments anciens” and “Deutsche Vereinigung für Alte Musik.” By the time historically informed performance standards had established themselves, violin makers were being called upon to return to the premodern style of constructing stringed instruments. Nowadays there are quite a few luthiers who enjoy pursuing experimental excursions in this area, and some ateliers even specialize exclusively in making and repairing Baroque instruments. Baroque violins can be grouped into four historical phases, regardless of the clearly distinctive and period-related characteristics in their design:

When it comes to the Baroque instruments which have been preserved in their original condition, it is difficult to define them without discussing what they are not, i.e. it is easiest to characterise them only based upon how they differ from the modern violin. In other words, the most typical characteristic of early violins appears to be the breathtaking variety amongst them, given what we can tell by examining original pieces from the 16th to 18th centuries. One of Europe's most complex and interesting cultural achievements took place as the craft of instrument making matured from generation to generation, thanks to the fact that there were few widely prevailing norms, and luthiers were fundamentally open to regional and family-based traditions. By no means were all Baroque instruments defined by the aforementioned "quiet sweet sharpness." In fact, this may perhaps be less of a true historic characteristic than a projection and an acoustic ideal that emerged in the context of reminiscence. There are neither recordings nor consistently reliable documents to confirm our interpretation. Presumably this lack of clarity was what led the way for pioneers of historical music to blaze a trail beyond the increasingly normative world of the 19th century, thus opening up the great artistic liberty that we know today in interpreting Baroque music. As a matter of fact, Baroque performance techniques have become part of the musical education for stringed instruments (at least for professional musicians). The many concerts and publications of recent years prove there is no truth to the old accusation made that historically informed performances were being left to stagnate like lifeless museum exhibition objects. At the end of the day, if we want to determine what a Baroque violin really is, we have to take a closer look at how it is played. What a lovely twist in music history!

The Baroque bow (The violin bow, part I)

On the history of Mittenwald violin making

Library - text about the history of stringed instruments