On the history of Jerome Thibouville-Lamy (J.T.L.) –
Part 2 in our series on the industrial production of stringed instruments in France

Like many other large instrument-making companies in Mirecourt in the 19th century, Jérôme Thibouville-Lamy, short J. T .L., arose from the merger of several successful ateliers. It had roots which ran across France all the way to Normandy.

In the small, traditional instrument-making town of La Couture-Boussey, the Thibouville family had been well-established since the 16th century in their work crafting woodwind and brass instruments. In the mid-19th century, Louis Emile Jérôme Thibouville entered the dynamic market for stringed instruments, and he saw the Mirecourt company Husson-Buthod as a promising partner which offered both a respectable size and well-honed expertise. Charles Buthod and Charles-Claude Husson had each established high quality standards in their ateliers – which were already successful in and of themselves – and they merged in 1848. These high quality criteria were not arbitrarily selected: they were based on the standards that prevailed at the Parisian atelier of Jean-Baptiste Vuillaume, where Buthod and Husson as well as many other great violin and bow makers of their generation had worked. As a result, they offered Louis Emile Jérôme Thibouville the ideal professional platform for his plans to enter the stringed-instrument market, and together they founded the Husson-Buthod-Thibouville company in 1857. This business arrangement also appealed to the two luthiers from Mirecourt, who anticipated outstanding opportunities to expand beyond France and sell their violins around the world. 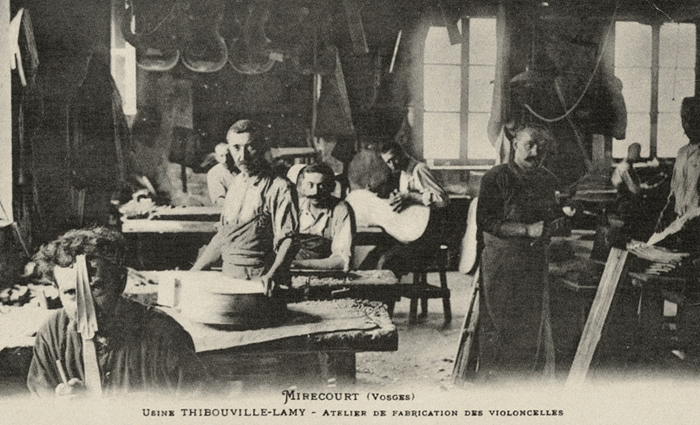 The ties that bind: the marriage that founded Jérôme Thibouville-Lamy (JTL)

Four years later, the marriage of Louis Emile Jérôme Thibouville and Marguerite Hyacinthe Lamy cemented the new connection between the family, and with J. T. L. it would eventually become one of the most powerful unions in the world of violin making. The match had an almost aristocratic flavour to it: after all, Marguerite was not only a cousin of Thibouville's two new business partners, she was also related to the Parisian merchant Claude Charles Duchene. The wedding led the Husson-Buthod-Thibouville company to begin operating as "Jérôme Thibouville-Lamy (J.T.L.)", which went on to become a famous brand. The company grew quickly under this name, and at its peak it reached annual production rates of over 150,000 instruments produced by more than 1,000 luthiers.

A window into the past: J. T. L.’s early catalogues

Jérôme Thibouville-Lamy's rise is impressively documented in the catalogues of the late 19th century and the fin de siècle period, where the expansion of and increased differentiation within their product palette can be seen. J.T.L.'s catalogues are not only interesting because of the striking engravings and photographs which illustrate how work was done at the ateliers, nor because of the images featuring the production sites and stately Parisian headquarters. Above all, these documents show the clever strategy of offering a well-structured range of products to meet the varying musical needs and aesthetic expectations which stringed musicians of the day had. A key focus of the catalogue was the student instruments at different levels of quality, products which played a significant part in J.T.L.'s success. Examples of two series that remain especially well-known and appreciated to this day are Médio-Fino („Mi-Fin“) and Compagnon. A second interesting product line included replicas of pieces by Jakob Stainer, Matthias Klotz and of course the classic Italian masters such as Antonio Stradivari. These violins were given names that reflected their historic inspiration as well as labels to match. Last but not least, there were also instruments named after old violin making-families from Mirecourt and elsewhere in France, which were of special interest. By no means had all of these smaller ateliers been integrated into Jérôme Thibouville-Lamy; some were maintained as a brand because of their good reputation.

Naturally this practice of naming J.T.L. instruments after other luthiers created some confusion about the provenance of many violins. This was certainly not an undesirable effect when it came to selling instruments and French violin bows, but the deliberate allusion to other violin makers was intended on multiple levels, since many of these violins kept the promises implied by the brand name.

After all, the J.T.L. workshops were not merely production sites of mass goods, which was the mistaken impression many held of Thibouville-Lamy (much like many similar large European companies in this period). Instead, J.T.L. was a site where the technical knowledge acquired over generations was concentrated — knowledge which outstanding violin makers brought to the company, as well as knowledge which radiated from there by masters who completed major phases of their training at J.T.L.. One interesting example is the Zurich-based violin maker Karl Siebenhüner, whose father Anton Siebenhüner studied under Gabriel Lemböck and worked as an employee of George Gemunder in New York for many years. In other words, even the son of an internationally experienced and highly awarded master was sent to Mirecourt so that working at J.T.L. would prepare him to take over the family atelier. Paul Kaul, who was an employee at Silvestre & Maucotel in the early 20th century and later made a name for himself with his own ateliers in Nantes and Paris, also learned his craft at Thibouville-Lamy. The list of great luthiers is practically endless – Marius Didier, Charles Fétique and almost countless others. These masters ran ateliers which confirmed that even in light of the exponential growth of an instrument-making town such as Mirecourt, there would always be room for traditionally-oriented businesses run by craftsmen. What's more, they also proved that a dialogue was still possible between two such seemingly irreconcilable approaches to making instruments. There is still a wealth of unresearched material to explore in this field.

On the history of industrial manufactories in Mirecourt