Tradition lives on in the historical town of Mirecourt:
portraits of six contemporary masters who have preserved their guild’s heritage.

Like its German and Italian counterparts, Mirecourt, the historic centre of French violin making, can look back on turbulent times. After the strict guild rules of the 18th century came a period marked by manufactured instruments, the first manufactur founded by master Didier Nicolas, which dominated the global market between 1850 and 1960. In the meantime, life has become more tranquil in this little town in northern France’s Vosges mountains with its population of no more than 6000, but by no means has it forgotten its finest traditions. In addition to the violin making museum “Musée de la Lutherie et de l'Archèterie Françaises,” it is home to the “École Nationale de Lutherie,” where excellent masters and violin makers keep the time-honoured art alive and dynamic. Below we present good news from Mirecourt in the form of five portraits of specially chosen contemporary violin makers in Mirecourt:

An inconspicuous little acrylic glass wall plaque next to the doorway places Mireocurt violin maker Jean-Philippe Cognier and Roland Terrier’s atelier in a great historical context: back in the second half of the 18th century, none other than Nicolas Augustin Chappuy lived and worked in their house. Jean-Philippe Cognier was born in 1955 in Auxerre and attended the violin making school in Mirecourt in 1972, which had only opened two years previously. He graduated in 1975, when René Morizot was Maître d´Atelier. After having completed his studies, he worked for the “Societé Française de Lutherie” (Sofraluth) for one year. In 1976, after a brief apprenticeship with Jean Bauer in Angers, Jean-Philippe Cognier became René Quenoil’s first assistant in Paris; he remained there until 1980, refining his restoration skills. In the same year, Jean-Philippe Cognier established his Mirecourt atelier together with Roland Terrier, who had also been René Quenoil’s assistant. Initially they worked on Rue Germini but ultimately moved to the historical venue on Rue Chanzy in 1987. Cognier was promoted to maître d’atelier at Mirecourt’s violin making school in 1990 and was the president of the French association of artisanal luthiers and bow makers (“Groupement des Luthiers et Archetiers d’Art de France” [GLAAF]) from June 2004 until June 2006.

Mirecourt violin maker Roland Terrier was born in Bourg-en-Bresse in 1956. From 1972 until 1975, he attended and graduated the Mirecourt school under René Morizot as did Jean-Philipp Cognier, who later became his partner. After successfully finishing his apprenticeship, he served as assistant professor to his master, intently studying the art of crafting new instruments. From 1977 until 1980, he worked in Paris with René Quenoil, who showed him how to improve and refine his expertise in repairing and restoring instruments. In the process, he became well acquainted with numerous historic pieces which passed through the atelier. Roland Terrier returned to Mirecourt in 1980 to found a workshop with his former fellow student and colleague, Jean-Philippe Cognier. Since then, they have trained several apprentices. As a member of the town council, he was involved in founding the violin making museum; as treasurer of GLAAF, he actively works on behalf of his adopted hometown’s concerns and its art. He is a fervent researcher of Mirecourt’s violin making history and is one of the leading experts in this field. 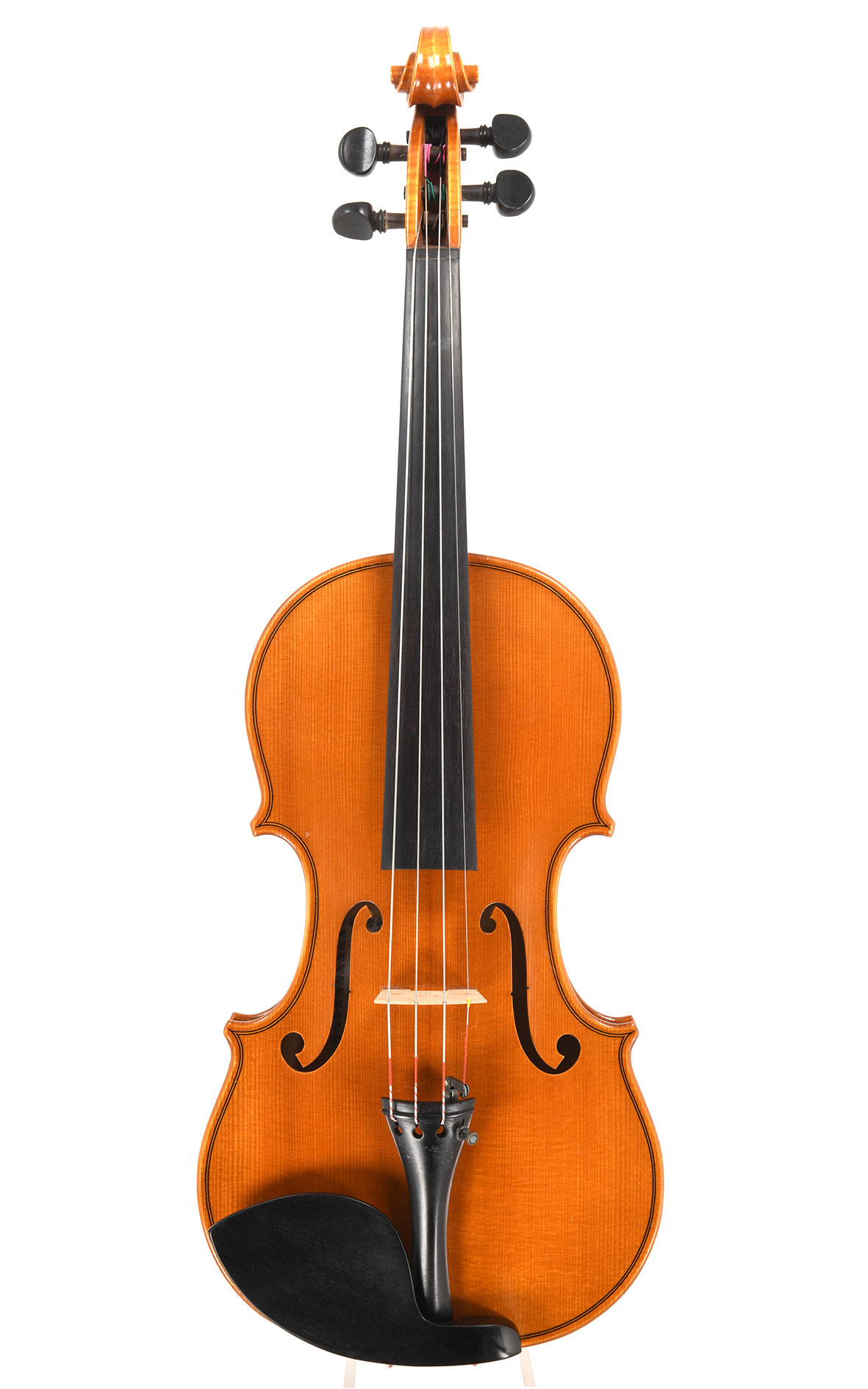 Even though Mirecourt violin maker Jean-Jacques Pagès was born in Paris in 1948, he did not train in his home country; instead, in 1966 he began his studies at the violin making school in Mittenwald, Germany. He then returned to his home town and worked at Étienne Vatelot’s renowned atelier, who in turn recommended him to his own master Jean Eulry in Mirecourt. After two and a half years there, Jean-Jacques Pagès returned to Vatelot; initially he was an employee but gradually came to manage the atelier. During those seven years, he honed his talents and developed his own style. This ultimately led him to open his own business in Mirecourt, the birthplace of the French violin making tradition, in 1977 – his contribution towards keeping the tradition alive. Jean-Jacques Pagès has won awards at several competitions, such as the International Mittenwald Violin Making Competition, and has had many protégés over the years. Jean-Jacques Pagès was the president of GLAAF from 1998 until 2001. In 2003, he founded the private school École Internationale de Lutherie d’Art Jean-Jacques Pagès. The thought of retiring has not even crossed Jean-Jacques Pagès’ mind; he currently focuses on crafting viols and other historical instruments.

Violin maker Dominique Nicosia also spent some of his training working for Étienne Vatelot, after studying with René Morizot at the Mirecourt school. During his 16-month military service following his four-year apprenticeship with Vatelot, Nicosia acquired some remarkable experience: he volunteered to work at the studio for making and restoring instruments at the music academy of Polynesia in Tahiti, allowing him to keep his talents fresh during this otherwise “unmusical” period. Back on the mainland, Dominique Nicosia decided to return to where he had started out professionally, and since that time he has been a maître d’atelier at the violin making school in Mirecourt. As he himself states, teaching has a rich effect on the work he pursues as a master luthier at his atelier on Rue du Fond de Janiveau. In addition to top-quality stringed instruments, Dominique Nicosia takes inspiring excursions into the field of metalworking, where he crafts sophisticated instrument-making tools for himself and his colleagues. At the 2004 Concours Etienne Vatelot, the viola he submitted received a special commendation from GLAAF for “personality and maturity.”

We have chosen one master violin maker to focus on to represent the great tradition of bow making in Mirecourt: Gilles Duhaut. Born in 1957 in Cirey-sur-Vezouze, he began his career as a student of the Mirecourt school, learning the fundamentals of his craft there from 1972 to 1976 under the famous Bernard Ouchard. He later spent six months in in Paris studying with Jacques Camurat, a student of Jean Bauer, Marcel Vatelot and Amédée Dieudonné who became an influential figure in French violin making in the late 1970s and early 1980. Back in Mirecourt, Gilles Duhaut returned to Ouchard and worked at his atelier there before leaving it once again in 1978 to assist the elderly Paul Didier in Metz for three years. Shortly after that, Gilles Duhaut opened his own studio in Mirecourt where he remained until moving to Tours in 2012. Gilles Duhaut’s clients include members of famous orchestras and soloists from around the world, including Misha Maisky, Yuri Bashmet and Franz Helmerson – not to mention jazz musicians such as the highly acclaimed Didier Lockwood, which whom Gilles Duhaut jointly developed a special bow model for playing jazz. It features a modern design and is noteworthy because of its weight distribution which is customized to the demands of playing the electric violin.

A richly ornamented cello with diamonds, gold leaf and intricate intarsia: Mirecourt violin maker Alain Carbonare presented this spectacular piece to none other than Mstislav Rostropovich on the occasion of his 70th birthday. Alain Carbonare has worked in Mirecourt since 1987, and his atelier is at a location which is rich in history and tradition, the former home of Jean-Baptiste Vuillaume. His passion for making violins arose as a youth when he heard Yehudi Menuhin perform. The experience moved him deeply, and Alain Carbonare promised himself that one day he would make an instrument for this great musician — a promise the young luthier fulfilled only a few years later, and his violin was well received by the maestro. Other world-famous artists such as Vladimir Spivakov and Grigory Zhislin have also played Alain Carbonare instruments that were made available to them through the Spivakov foundation, which supports rising Russian talents. Given his dynamic interest in music and his many talents, it is no wonder that Alain Carbonare ranks amongst the class of luthiers who enjoys successes well beyond the boundaries of their art. At the 1981 Montreux Festival, Mirecourt violin maker Alain Carbonare received the Grand Prix du Disque for the music project “Wurtemberg” and the related CD production “Rock Fantasia Opus 9” which featured instrumental works he composed; he also performed on some of the tracks.