This Victor Fétique violin bow is a fine, late piece of his oeuvre that was made around 1930. The radiantly large sound and comfortable playing properties of are compelling evidence that French violin bows fully deserve the...

This Victor Fétique violin bow is a fine, late piece of his oeuvre that was made around 1930. The radiantly large sound and comfortable playing properties of are compelling evidence that French violin bows fully deserve the excellent reputation they enjoy amongst demanding musicians – and they also explain why the work of Parisian master Victor Fétique holds a special rank in these circles. Born in Mirecourt, the musical town in the Vosges mountains of France with centuries of traditions in violin and bow making, Victor Fétique underwent thorough training under highly regarded masters such as Charles Claude Husson, Sigisbert Fournier Maline and Émile Miquel, who had a measurable impact on their field in the latter half of the 19th century. As an heir to this tradition, Fétique refined his personal style under Charles Nicolas Bazin and then spent twelve years at the renowned studio of Caressa et Français. The influence of his colleague Claude Thomassin led Fétique to optimise his bow model and integrate characteristics of the great historic mentors Eugene Sartory and Joseph Alfred Lamy until he found the courage to open his own workshop in 1913, a period in which his work perfectly corresponded to the demands of the Parisian music scene. This was where the main body of his oeuvre was produced until the 1920s, when health problems forced him more and more often to commission pieces to colleagues before revising the products and selling them under his name. This bow is a rare authentic example of a late Fétique violin bow that the master himself crafted, illustrating the excellence of his work at a point in time that turned out to be three years before his death. The thick octagonal stick of the finest pernambuco features excellent tension. With a balance point that inclines slightly towards the tip of its total weight of 62.1 g, the bow features outstanding balance, sits comfortably in the hand and can be controlled brilliantly. Other than a few minor minimal repairs to the ebony frog ornamented with a Parisian eye – repairs that were professionally done and are inconsequential from a musical standpoint – and a newer button, this silver-mounted Fétique bow still in its undamaged original condition, and after having been painstakingly set up at our workshop, it is now ready to play. Its authenticity is confirmed by Victor Fétique’s mark and a certificate and appraisal issued by the Paris-based bow expert J.-F. Raffin. 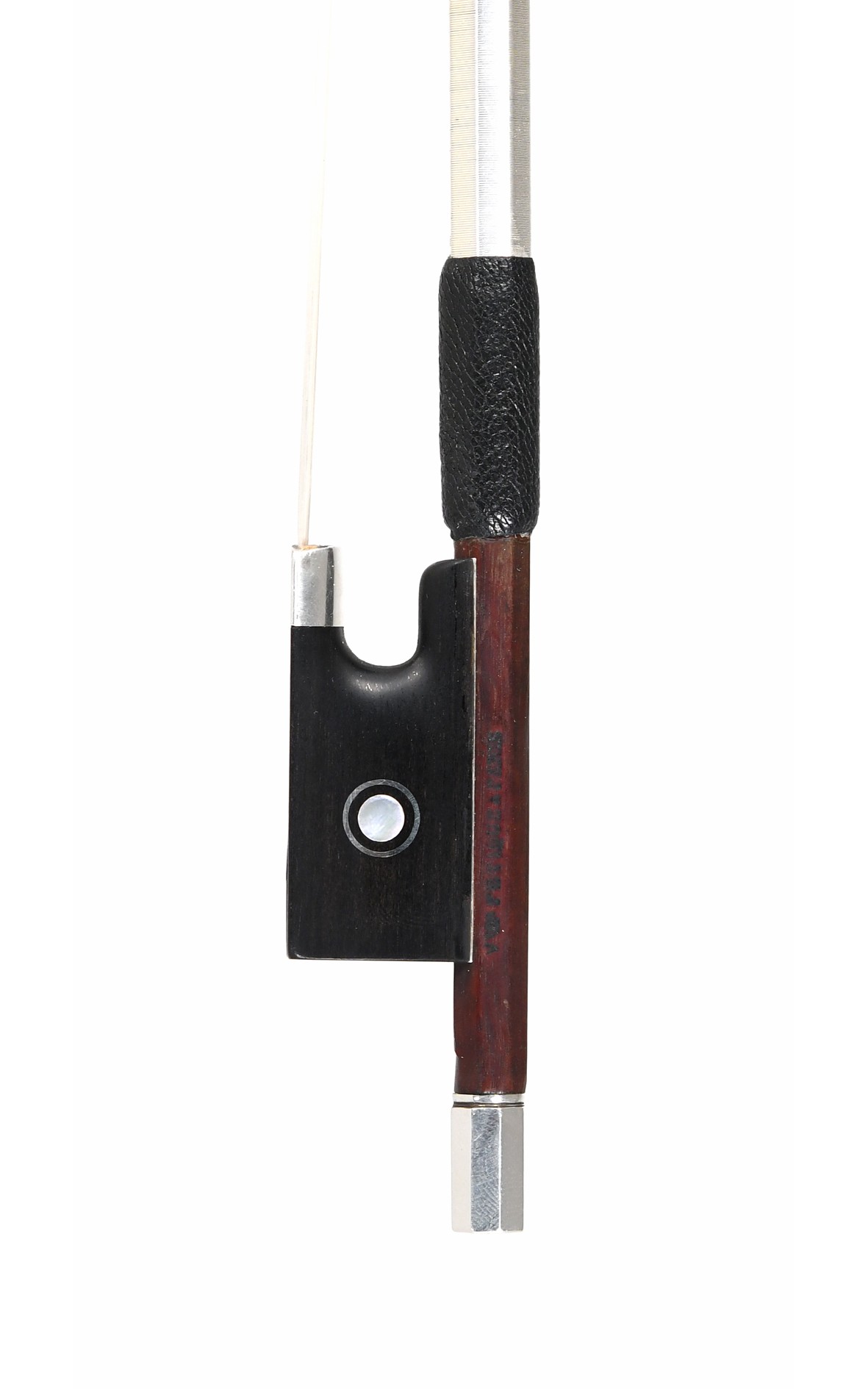