As a young man, Pierre Joseph Hel was said to have repeatedly abandoned the sheep he had to herd near his hometown of Mazirot; he wandered off so he could see the violin ateliers in nearby Mirecourt instead. He was drawn to the cradle of French violin making where he dreamt of life in a different world, a musical world. In 1856, at the age of fourteen, Hel began his apprenticeship under François Salzard (1808-1874), from whom he learned the fundamental secrets of French violin making how to use good woods to craft solid and resonant violins patterned after the Stradivari model, the very kinds of instruments which made the ateliers of Mirecourt a success and put the town on the map. 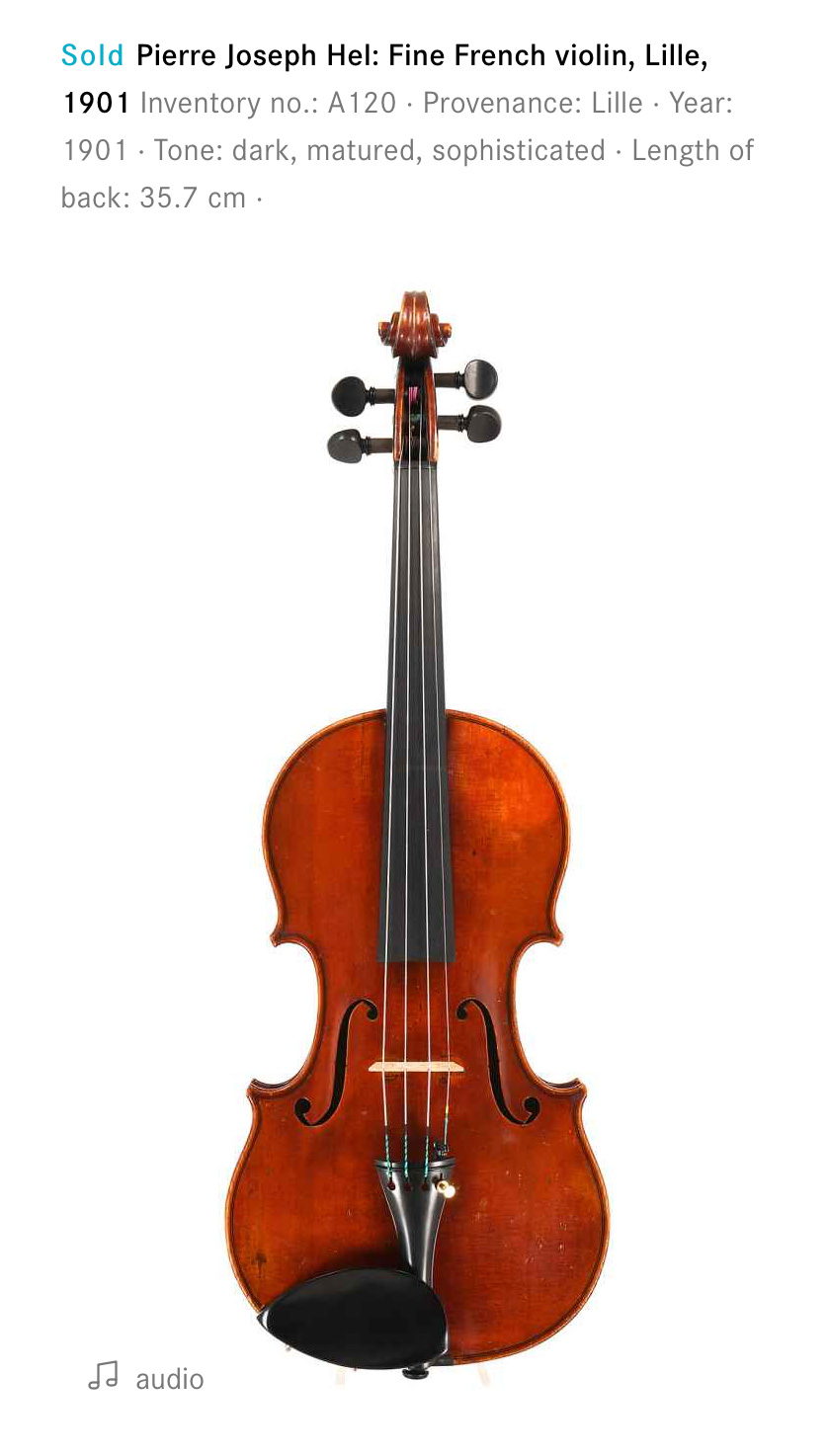 Having grown beyond the workshop where he trained, Joseph Hel later worked under Victor Poirot and Grandjon in 1861 before gradually making his way to Laberte-Humbert. The company that was founded in 1780 was managed by Maurice Emile Laberte (1856-1898) and had begun an unparalleled phase of expansion that lasted for over 50 years. Propelled by the restless thirst for knowledge that defined so many outstanding violin makers, Joseph Hel moved on in 1862 and ended up in Paris working for Sébastien Vuillaume, the youngest member of the famous family of luthiers. Subsequent brief stints under E. Henry-J. Martin in Paris as well as Nicolas Darche in Aachen gradually led Hel back to Laberte-Humbert. By this point, he was an extensively trained and highly experienced young master and only remained at the workshop for another year before accepting the advice of the legendary Jean-Baptiste Vuillaume and founding his own atelier in Lille in 1865.

With this step forward, Joseph Hel advanced to become one of late-era Vuillaume's most important contemporaries as well as one of the most prominent French violin makers in the latter half of the 19th century. Some of the bows that feature the J. Hel stamp - as a J. J. Martin bow in our catalogue - which in part have miniature portraits on the eye of the frog cannot be definitively attributed to Joseph Hel. However, even though their provenance is not fully resolved, these bows nevertheless remain outstanding pieces patterned after Charles Nicolas Bazin's work, and they certainly demonstrate Joseph Hel's extremely demanding standards.

Joseph Hel remained as a violin maker at the conservatory in Lille in constant contact to musicians who filled him with inspiration in terms of technical innovations. For example, he learned to improve his approach to drying tone woods, and he crafted a peg box with a shape which made very refined and very stable tuning possible. In keeping with the violin-making tradition dating back to Lupot, the joy that Joseph showed in experimenting with classic Italian models was not unusual for his day. His artisanal craftsmanship yielded instruments that were not only daring and innovative: they were always musically and aesthetically perfect as well. These pieces set new standards that were imitated and adopted by later generations of French violin makers. His highly appropriate sense of self-confidence led Hel to distinguish between his own numbered master instruments and violins made in his atelier; he used several stamps and signatures, some of which he concealed.

Joseph Hel died at the age of sixty in Lille on 14 March 1902, and his impact on employees and students endured for ages to follow. Those who were influenced by his work include important figures in modern European violin making such as Léon Victor Mougenot, Auguste Marissal and Karel Boromäus Dvorak – but also Joseph Hel's son, Pierre Jean Henry Hel (1884-1937), who went on to become his worthy heir.

The Chanot family of violin makers